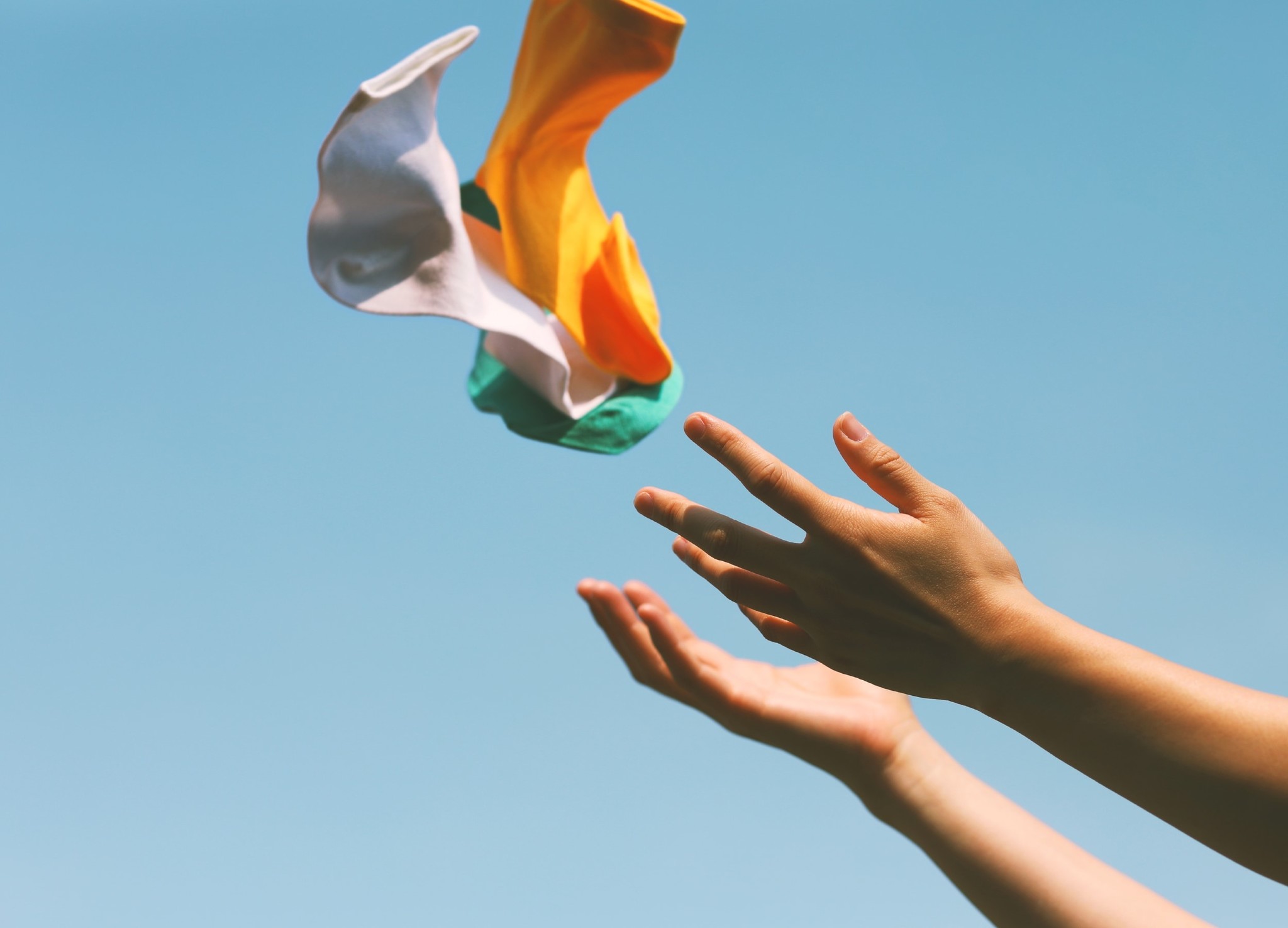 Since the company's inception in 1968, its founder Mr. OCHI, has continued to pursue this dream: to make the world's most comfortable socks using traditional Japanese manufacturing techniques. This primary desire to highlight Japanese craftsmanship is based on the ancient belief that what is right will endure, even if fashion is constantly changing in appearance. For more than 50 years, Tabio has cultivated the mentality of Japanese craftsmanship, which is always in search of harmony, whether it be in the satisfaction of the customer or that of the different actors in the chain (suppliers, manufacturers, sellers, etc.). This constant search for harmony has led to the creation of a business model that today is defined as both reliable and responsible.

Proximity in the supply chain

Tabio has set up a system that allows it to produce a very varied collection of socks while taking into account the immediate needs of its customers. The supply chain at Tabio is based on the principle of bringing the factory and the shop as close together as possible in order to be more reactive and avoid waste.

Like any fashion item, socks are subject to trends and these change very quickly. In the past, it took one to two months from the start of manufacturing a product to its arrival in shops. It was often difficult to supply the model when the customer really wanted it, and unfortunately it sometimes arrived on the shelves after the trend or the season, which led to a build-up of stock that was difficult to sell later. This system was therefore not efficient and created stock management problems.

The company then asked itself how it could satisfy customer needs as they arose in the shop, while avoiding a backlog of goods. Ideally, of course, the company would have known at the planning stage how much sales could be expected for each model, but this would have been as difficult as trying to predict the weather! It was only after many unsuccessful attempts that Tabio succeeded in setting up a system that allowed manufacturers to accurately track the sales of each product in the shops in real time and thus organise replenishment according to actual needs, rather than random estimates.

This system, which has proven its effectiveness for almost half a century, has brought together all the players in the supply chain (manufacturers, dyers, distribution centre, shops) by giving them access to sales and stock information, with the aim of putting an end to mass production and the waste it causes. As a rule, products available at the distribution centre are delivered to the shops within one or two days. And when there is no stock available in advance, it is now possible to deliver products to the shops within a week thanks to the responsiveness of the manufacturers. In addition, the shops have remote access to the stock levels for each model and can therefore provide the customer with precise information on the replenishment times.

This proximity between factories and boutiques benefits all actors in the supply chain insofar as it avoids the excessive production of stock by artisans, the purchase or storage of raw materials in excessive quantities, or optimises the management of stocks in boutiques, but also reduces the risks of dormant stock at the factory or distribution centre at the end of the collection.

Produce according to the real needs of the market

In Japan, textile waste directly related to the ready-made garment industry amounts to one million tonnes per year. In addition, it is estimated that about 50,000 tonnes of socks are thrown away, which represents 1.3 billion pairs per year. In order to avoid overproduction, Tabio has always sought to identify the needs of its customers and to manufacture according to demand rather than mass-producing. This is why Tabio has chosen to favour direct sales in its own shops, where customer advice is favoured, allowing it to identify customer expectations and behaviour. In addition, the company has chosen to develop a close link between the sales team in each shop and the team at the company's head office, which is itself active in the field, in order to better understand the habits and real needs of the clientele and thus better anticipate and plan the renewal of collections.

All links in the supply chain are subject to a very strict inspection system, based on the principle of full responsibility for the products marketed. Tabio works very closely with its craftsmen, both in the sock factories and in the dye houses. It therefore knows the exact composition of its products, as well as the dyes used for the different materials. Always very rigorous in the selection of its raw materials, the company practices transparency in its supply system and develops responsible manufacturing.

“Mottainai " is a Japanese term used to express the discomfort with waste.
In Japan, consumers have long been taught that it is not good to leave things in bad shape or to waste.

Tabio participates in the BRING* recycling project, which invites customers to return their used products to the shop. As part of this activity, Tabio collects around 100,000 pairs of used socks per year (112,000 pairs in 200 shops in 2019, 53,000 pairs in 2020) and hands them over to the BRING organisation, which recycles the polyester they contain into a new raw material. While the annual production of polyester is about 52 million tonnes, BRING is actively involved in reducing the amount of oil used to make this type of yarn. Of course, the other raw materials are also recycled as much as possible.

This recycling activity also aims to develop the production of biofuel from the cotton of used clothes.

How many pairs of socks do you own? Tabio and a research company found that "70% have more than 10 pairs of socks". But you probably only actually wear about five of your favourite pairs of socks. For many customers, the socks that are not their favourites have become "junk socks". In collaboration with the BRING* initiative, Tabio collects unwanted socks and tights at its shops and asks a specialist company to recycle them into raw materials for textile products, making them useful to the world once again. 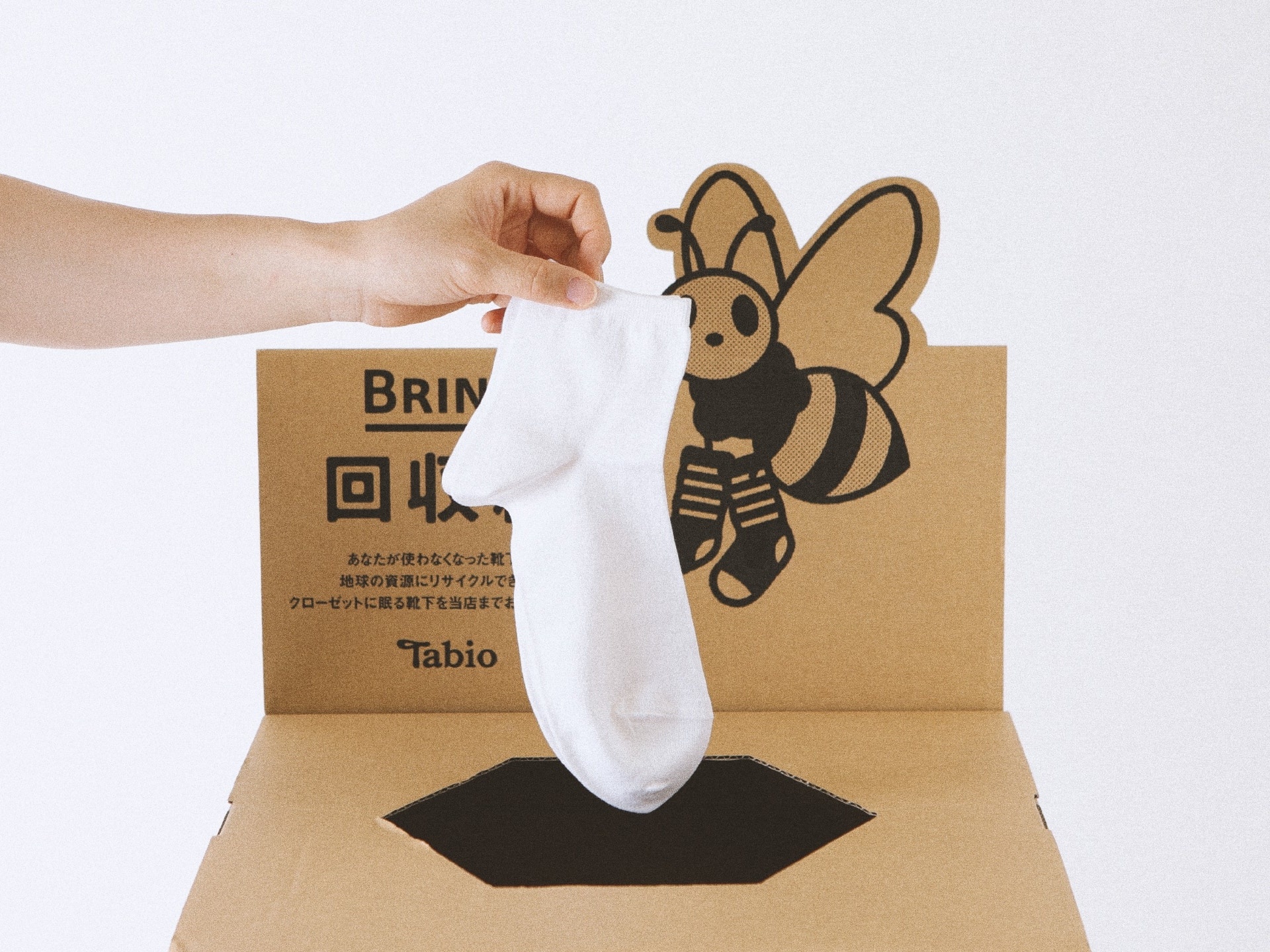 *Service available at Tabio outlets in Japan only.

Tabio began growing its own cotton in the town of Koryo-cho, located in the Nara region of Japan. These cotton seeds, from which soft socks are made, are grown without the use of chemicals, out of respect for the consumer, but also out of respect for the producer and of course for the environment. In this activity, the cultivation of cotton on fallow rice fields is a priority, as is the link with the local population.

In Japan, it is not uncommon to hear the widespread saying, "a bird that leaves leaves the water clear". This means that it is important for everyone to be aware of what they leave behind. That's why Tabio is committed to reducing its waste production in all its factories. One of the ways it has done this has been by raising awareness among children and the elderly. Since 2015, the company has donated thousands of knitted fabric scraps from its factories to schools and old people's homes across Japan, enabling young and old alike to discover the joys of sewing and crafting. From the fabric scraps, everyone can use their creativity to make a variety of objects, while discovering more or less ancient craft techniques. 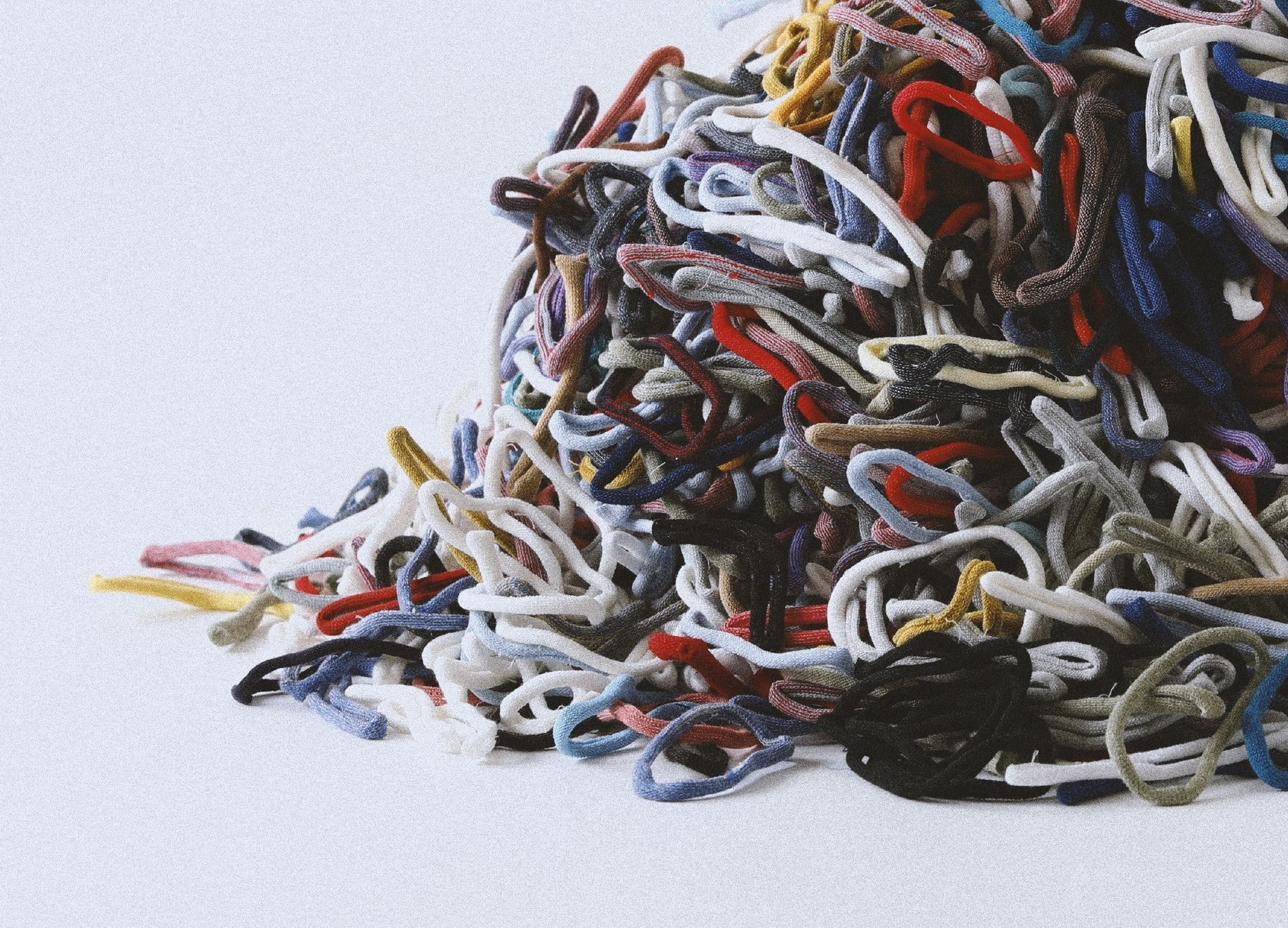 Reuse of 'scrap rings', about 50 million of which were disposed of annually.

The company is working to ensure that the scrap loops produced in the sock manufacturing process are not disposed of as industrial waste, but are instead reborn and utilised. The company produces more than 25 million pairs of socks a year, which generates approximately 50 million 'scrap rings', two per pair. We are working to recycle these rings, which would normally be thrown away.

Currently provided to more than 500 places as teaching materials to support schools.

It all started when the Association for the Study of Learning Disability Education contacted us to use it as a teaching aid for support schools. This led to word of mouth spreading that it could also be used for functional training and rehabilitation, and today it is provided to more than 500 locations. As well as being an initiative to reduce (waste reduction) and reuse (re-use), the project improves the environment by reducing CO2 emissions during incineration and supports health maintenance and promotion through functional training and rehabilitation of the hands.

In the 1970s, when most companies were choosing to outsource, Tabio held firm to continue working locally with Japanese craftsmen, manufacturers from father to son, often over several generations.

In addition, in order to be at the forefront of innovation and in a bid to constantly improve, the company has developed its own research centre in the province of Nara since 1987. There, Tabio tests all its models (resistance, abrasion, UV, washing, etc.) using machines made by its own technicians and specialists.

His constant desire for improvement and responsible management at all levels, as well as a real proximity between all the actors in the supply chain adapted to local realities, have allowed Tabio to distinguish itself and acquire a strong notoriety in its sector of activity, but also on a global scale. The invitation in 2019 to participate, as a private company, in the OECD* conference in Paris, on the theme "Responsible Supply Chains in the Clothing and Footwear Sector", bears witness to this and demonstrates its active involvement for sustainable development and responsible economy.

*The Organisation for Economic Co-operation and Development

Building on its long experience, Tabio continues to think about new activities that will allow it to continue to develop its commitment to sustainability on different levels.
The company has long had the dream of growing its own cotton in Japan. With the success of its Koryo cotton product range, Tabio now hopes to expand this experience and offer more products made from eco-friendly materials in the future.